When the student is ready to learn, the teacher appears.  Flylady led me to Suze Orman, and in discussing her with my brother, I was led to Dave Ramsey.  My brother gave me a copy of the Total Money Makeover in late 2006.  I drank the cool aid!  At the time I had just over $62,000.00 in debt.  Broken down it was my student loan, a 401k loan, a credit card and my car loan.

Dave Ramsey is also all about the baby steps.  I must have a thing for baby steps.  His first baby step is to save $1000.00 for emergencies.  The rationale is that as soon as you start to get your act together, shit will happen to derail you.  Your $1000.00 baby emergency fund is a safeguard against Murphy’s Law.

The second baby step is to use the “debt snowball” method of paying off your consumer debt.  With this method, you list your debts smallest to largest, pay minimum payments on all but the littlest and focus your energy on wiping out that baby one.  Then you take what you were paying on that, along with the minimum payment you were making on #2 and wipe out #2.  Continue this process until you’re debt free.  In a manner similar to the Flylady method, when you kill that first debt, you get the rush you need to keep going.  This is the most intense baby step.  This is where you work a second job, sell the dog on eBay, eat nothing but beans and rice, whatever you need to do, to knock out the debt as quickly as possible.  In a later post, I’ll share with you the rather drastic step I took that helped me eliminate my debt.

The third baby step is to continue to live on beans and rice just a little bit longer so you can build up your real emergency fund of 3-6 months expenses.

The fourth, fifth and sixth baby steps are usually done simultaneously: you are saving for your kids’ college education, putting 15% of your income away for retirement and paying off your house.

And the fun really happens at step seven: Build wealth and give a bunch of money away!  In step two you “live like no one else so later you can live like no one else,” but step seven is about giving like no one else.  Around the holidays, Dave has callers call in to share their giving stories.  There isn’t a bragging tone about it at all,  “I did xyz…” it’s an inspirational tone; “I’m blessed to be in this position and I was able to do this and I want you to be able to have this much fun too.”  Can you imagine going into Walmart the week before Christmas and handing out a $100.00 gift card to the young mother you see trying to make a holiday for her kids while continuing to feed them?  I feel like when we’re not stressing over our own earthly needs, we’re able to more fully be a conduit of the generous universe we’re a part of.  In Christian terms: we can do God’s work.

So I started my debt snowball in January 2007.  I paid off my last, largest debt, my student loan, on May 28, 2010.  At the bank, I grabbed three lollipops from the jar at the counter, I picked my kids up from school, we yelled, “I’m DEBT FREE!” in the car at the top of our lungs and celebrated with our candies.  Those kids endured three sparse years of crafted holidays and birthdays, not eating out, sharing an apartment bedroom, and extreme penny pinching.  They were just as much on board as I was, and even if they weren’t, they were certainly along for the ride.  They deserved to be part of the party when it was over.

Shortly after, we had our emergency fund in place PLUS the down payment for our house.  The kids got the ultimate reward:  their own bedrooms and a backyard to play in.  And we live happily ever after, right?  Well, mostly…

Of course, life freaking happens.  In June 2015 I got sick and by July I couldn’t work.  Even a six month emergency fund will run out when you have a yearlong emergency.  I have disability insurance because California rocks, but that is calculated at 55% of your previous years’ income.  So we had to cut back 45% of our spending!  That took a bit to get adjusted.  To make it more difficult, the disability insurance pays a set amount per day but they issue payments whenever the freak they feel like it, not on a regular schedule.  I could go two weeks between payments and get paid 14 days’ worth, or I can go three and a half weeks and get 25 days’ worth.  And there is no rhyme or reason to it whatsoever.  What I ended up doing is getting a credit card from my bank and having all of my utilities get charged to the card so they’d be paid on time, then pay off the credit card when I got paid.  I justified it because it was not “business as usual” with Mama down and out.

The problem is, I still have about $3,000.00 on that card so I’m right back to baby step two.  Damnit!  But the good news is, I know how to get it done.  And my kids are older and more understanding.  Actually, because they’re older, I’m thinking I might need a holiday job at Target.  That will allow me a discount (yay!) and the extra income to banish debt from my life once and for all.  And maybe sneak in a little bit of that mega giving because it just sounds so fun! 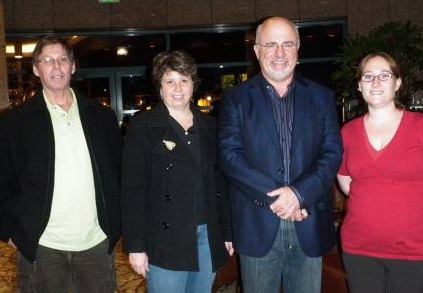 From left to right: my dad, Dennis, my Stepmom, Staci (yeah), Dave Ramsey and myself in January 2010.  We went to see one of his live seminars and ended up staying in the same hotel!